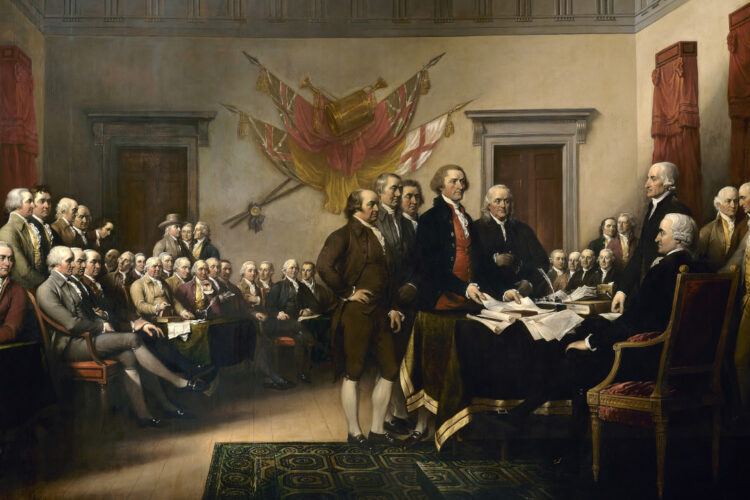 On July 4, 1826, fifty years after the signing of the Declaration of Independence, both the author of the Declaration, Thomas Jefferson, and one of the greatest advocates for independence, John Adams, died within hours of each other. Later, Daniel Webster eulogized John Adams in Boston’s Faneuil Hall. While Adams never gave the speech, Webster captured the essence of Adams’ feelings about the Declaration and the independence that followed. I have adapted it to today as best as I could.

Sink or swim, live or die, survive, or perish, I give my hand and my heart to this Declaration of Independence. It is true, indeed, that in the beginning our Founding Fathers aimed not at independence. But there’s a Divinity which shaped their ends and will ultimately shape ours. The injustice of the federal, state and even local governments may drive us to arms; and, blinded to their own interest for what they mistakenly believe is for our good, they have obstinately persisted forcing us down a path nobody wants to travel. We have but to reach forth to it, and it is ours. Why, then, should we defer the Declaration, to ignore its timeless truths? Is any man so weak as now to hope for a reconciliation with our governments, which shall leave either safety to the country and its liberties, or safety to his own life and his own honor? Are not we, the people of the United States of America, already the proscribed and predestined objects of punishment and of vengeance? Cut off from all hope of righteous clemency, what are you, what can you be, while the power of unconstitutional government remains, but outlaws? If we postpone the fight for our continued independence from unconstitutional government, do we mean to carry on, or to give up, the struggle? Do we mean to submit to the unconstitutional measures, mandates, orders, etc., of Congress, the president, the Supreme Court, and state and local government? Do we mean to submit, and consent that we ourselves shall be ground to powder, and our country and its rights trodden down in the dust? I know we do not mean to submit. We never shall submit. Do we intend to violate that most solemn obligation ever entered into by men, that plighting, before God, of our sacred honor, as well as the political hazards of the times, in every extremity, with our fortunes and our lives? I know there is not a man here, who would not rather see a general conflagration sweep over the land, or an earthquake sink it, than one jot or tittle of that plighted faith fall to the ground. For myself, may my right hand forget her cunning, and my tongue cleave to the roof of my mouth, if I hesitate or waver in the support for the Declaration of Independence, for the liberty of happiness of my fellow citizens.

We must go on. We must fight it through. And if we must go on, why put off longer the Declaration of Independence, its enforcement, its principles, and the sacred honor to which we owe to those who made its ideas come to fruition? That measure will strengthen us. It will give us character abroad. The nations will then treat with us, which they never can do while we acknowledge ourselves objects of tyranny from wherever they come. Nay, I maintain that the cowards in government itself will sooner treat for peace with us on the footing of the principles of the Declaration of Independence, and consent to repealing their pretended acts of benevolence for the people, their mandates, and acknowledge that her whole conduct towards us has been a course of injustice and oppression and corruption. Their pride will be less wounded by submitting to that course of things which now predestinates our continued independence, than by their refusal to yield to the standard of liberty emblazoned on the hearts of Americans over 200 years ago. And since we must fight it through, why not put ourselves in a state to enjoy all the benefits of victory, if we gain the victory?

If we fail, it can be no worse for us. But we shall not fail. The cause will raise up patriots across America. The people, the people, if we are true to them, will carry us, and will carry themselves, gloriously, through this struggle. I care not how fickle other people have been found. I know the people of these United States, and I know that resistance to government aggression is deep and settled in their hearts and cannot be eradicated. Sir, a renewal affinity for and desire to act upon the principles of the Declaration will inspire the people with increased courage. Instead of a long and bloody war for the restoration of privileges, for redress of grievances, for chartered immunities, held under an unconstitutional government, set before them the glorious object of entire independence, and it will breathe into them anew the breath of life. Read this Declaration at the head of every assembly of citizens, in church, in patriotic gathering everywhere; and the solemn vow uttered, to maintain it, or to perish on the bed of honor. Publish it from the pulpit; religion will approve it, and the love of religious liberty will cling round it, resolved to stand with it, or fall with it. Send it to the public halls; proclaim it there; let them hear it who heard the first roar of tyrants acting like typical despots; let them see it who saw their brothers and their sons, their wives and children crushed under despotic edicts, acts and mandates, and the very walls will cry out in its support.

I know the uncertainty of human affairs, but I see, I see clearly, through this day’s business. You and I, indeed, may rue it. We may not live to the time when this Declaration shall be made good again. We may die; die patriots; die slaves; die, it may be, ignominiously and on the scaffold. Be it so. Be it so. If it be the pleasure of Heaven that my country shall require the poor offering of my life, the victim shall be ready, at the appointed hour of sacrifice, come when that hour may. But while I do live, let me have a country, or at least the hope of a country, and that a free country.

But whatever may be our fate, be assured, be assured that this Declaration will stand. It may cost treasure, and it may cost blood; but it will stand, and it will richly compensate for both. Through the thick gloom of the present, I see the brightness of the future, as the sun in heaven. We shall make this a glorious, an immortal day. When we are in our graves, our children will continue to honor it. They will celebrate it with thanksgiving, with festivity, with bonfires, and illuminations. On its annual return they will shed tears, copious, gushing tears, not of subjection and slavery, not of agony and distress, but of exultation, of gratitude, and of joy. Sir, before God, I believe the hour is come. My judgment approves this Declaration, and my whole heart is in it. All that I have, and all that I am, and all that I hope, in this life, I am now ready here to stake upon it; and I leave off as I begun, that live or die, survive, or perish, I am for the Declaration. It is my living sentiment, and by the blessing of God it shall be my dying sentiment, Independence, now, and Independence forever!

May we all mutually pledge, as did the Founders, to support this Declaration “with a firm reliance on the protection of divine Providence … [dedicating] our Lives, our Fortunes and our sacred Honor.” With Abraham Lincoln, I urge “you to come back. … [C]ome back to the truths that are in the Declaration of Independence.”