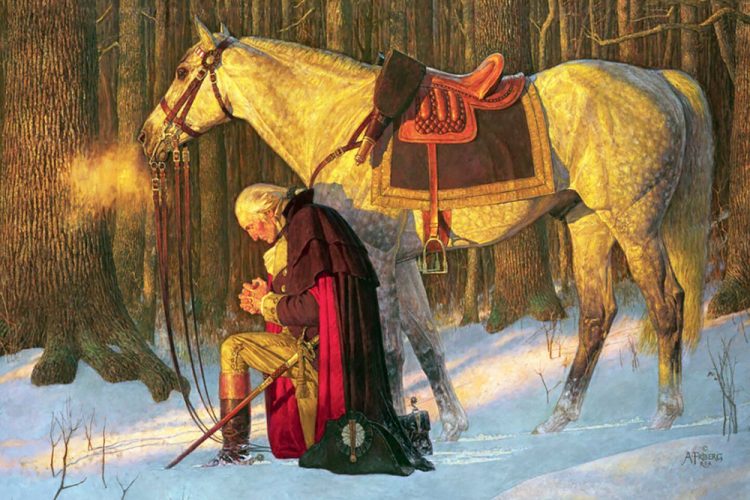 As we are nearing the time of Thanksgiving in a year filled to the brim and overflowing with heartache, sickness, oppression and many other afflictions and difficulties of 2020, it is paramount that we take a step back and also look at the bounteous blessing the hand of Providence has poured out. While there are some in government who would cancel or severely restrict families, friends and neighbors from spending the day together with loved ones, it is not only our right as citizens of the United States, as guaranteed in our Constitution, but it is our natural right as children of a loving Heavenly Father who endowed us with such blessings as our lives, liberties, and the right to pursue that which brings happiness, which includes holiday celebrations.

We must remember that those of America’s Founding Era did not fail to recognize the hand of Providence who provided the means to liberate themselves from the tyranny of a despot many thousand miles away but rather provided for those inestimable blessings while in the depths of immense suffering.

One such example is the winter of 1776-1777. General George Washington had suffered the loss of New York, battles in New Jersey and his army was poorly trained, poorly equipped and supplied, and was suffering from exposure to the elements and various diseases from smallpox to dysentery and others. Yet on Christmas Day and the morning of the 26th, he pulled off a stunning surprise attack in freezing rain, snow, and winds as he famously crossed the Delaware River to attack a garrison of Hessians or German mercenaries aligned with the British crown.

Preceding this, a large portion of Washington’s army had been lost to capture, sickness, desertion, and he was left with fewer troops than he wanted for the attack. Despite the difficulties, he succeeded in his attack on Trenton, killing 22, wounding 92 and capturing over 900 Hessians. The attack provided much needed clothing, arms, and other supplies for Washington’s army. American’s suffered two deaths only, both of which came from freezing to death, and 5 wounded.

In January, Washington would again make an attack on Princeton which solidified France’s assistance in America’s fight for liberty. This was done still with too few supplies, too few battle ready troops, too much sickness among his troops and in the middle of a severe winter.

However, this was nothing compared to the suffering in Valley Forge the following year. Of the 11,000-12,000 troops in his army camped there, the death toll pushed 15% or between about 1700-2000 soldiers from the diseases of pneumonia, smallpox, dysentery, typhus fever, and other diseases possibly exacerbated by malnutrition and poor shelter from the elements.

These two examples make our current pandemic pale in comparison. We are not at war with a despotic king seeking our death, nor do most American’s suffer from starvation, lack of adequate shelter and trying to stay healthy from attacks by multiple diseases. Rather, we are afflicted with one disease and government’s over-reaction to it and government’s inaction in criminal acts perpetrated by fellow-citizens, none of which has forced us to utilize our 2nd Amendment right to throw off government yet.

I provided these examples to show that American’s have dealt with much worse circumstances in the past, for which we can count that as a blessing from Providence.

After the war concluded with a victory for liberty for Americans, after forming a Constitution and limiting government to an enumerated, limited form of government, Washington, in his first year as America’s first president proclaimed a day of Thanksgiving. It is as follows:

Whereas it is the duty of all nations to acknowledge the providence of Almighty God, to obey His will, to be grateful for His benefits, and humbly to implore His protection and favor; and whereas both Houses of Congress have, by their joint committee, requested me “to recommend to the people of the United States a day of public thanksgiving and prayer, to be observed by acknowledging with grateful hearts the many and signal favors of Almighty God, especially by affording them an opportunity peaceably to establish a form of government for their safety and happiness.”

Now, therefore, I do recommend and assign Thursday, the 26th day of November next, to be devoted by the people of these States to the service of that great and glorious Being who is the beneficent author of all the good that was, that is, or that will be; that we may then all unite in rendering unto Him our sincere and humble thanks for His kind care and protection of the people of this country previous to their becoming a nation; for the signal and manifold mercies and the favorable interpositions of His providence in the course and conclusion of the late war; for the great degree of tranquility, union, and plenty which we have since enjoyed; for the peaceable and rational manner in which we have been enabled to establish constitutions of government for our safety and happiness, and particularly the national one now lately instituted; for the civil and religious liberty with which we are blessed, and the means we have of acquiring and diffusing useful knowledge; and, in general, for all the great and various favors which He has been pleased to confer upon us.

And also that we may then unite in most humbly offering our prayers and supplications to the great Lord and Ruler of Nations, and beseech Him to pardon our national and other transgressions; to enable us all, whether in public or private stations, to perform our several and relative duties properly and punctually; to render our National Government a blessing to all the people by constantly being a Government of wise, just, and constitutional laws, discreetly and faithfully executed and obeyed; to protect and guide all sovereigns and nations (especially such as have shown kindness to us), and to bless them with good governments, peace, and concord; to promote the knowledge and practice of true religion and virtue, and the increase of science among them and us; and, generally, to grant unto all mankind such a degree of temporal prosperity as He alone knows to be best.

Given under my hand, at the city of New York, the third day of October, in the year of our Lord one thousand seven hundred and eighty-nine.

We would do well to remember our Founding Fathers and the blessings they struggled for and suffered all manner of deprivations so that we, their posterity, and others in this heaven blessed land could enjoy the blessings of liberty. During this time of crisis in America, it is imperative that families go home for the holidays, spend time together, talk, laugh, sing praises to Him above who blesses us most liberally, pray to Almighty God thanking Him for the blessings of liberty and being able to worship that Great Being who is merciful in a land that provides the guarantees of religious worship. It is extremely important for us to show our gratitude to Him and to seek a forgiveness of sins and implore Him for mercy and continued blessings on each of us and our fellow Americans and country. In short, we should follow the righteous proclamation of President George Washington.

Again, it is imperative and, I believe, the mind of Almighty God, that families come together to sing, pray and so on. What loving Heavenly Father would not take great joy in families spending time together regardless of the afflictions that are before us? Those who seek to thwart the will of God by restricting or prohibiting families, friends and neighbors, no matter the size of the group, from assembling together, socializing, and enjoying God’s bounteous blessings are in danger of His wrath. I would urge all to ignore those that seek to thwart our rejoicings and thanksgivings, go home to families and friends, enjoy their company and give thanks to our Great and Eternal Father who wishes to hear from His children who show Him their gratitude for such plenteous blessings.

During this time of crisis, one of the blessing of Providence is that many people have reevaluated their priorities and realized that, in the end, family is what is most important. We must remember the blessings of liberty, the blessings of friends and neighbors, the blessings of being able to help and serve our fellow citizens in trying to lift their burdens, alleviate their suffering, comfort those who mourn for the loss of their loved ones.

We must remember the blessings of sacrifice, particularly the sacrifice of those patriots from the beginning at Lexington and Concord, to Fort McHenry, to Gettysburg, to Pearl Harbor, Normandy, to our first responders today and so many others who sacrificed so that we may enjoy the blessings bestowed bountifully by the Hand of Providence And most importantly, we must never forget to thank a loving Heavenly Father for the Great and Infinite Sacrifice of His Most Beloved Son, whose sacrifice provides for our liberty from sin and death. These are they of whom the hymn was written that states “As He died to make men holy, Let us die to make men free; While God is marching on.” God is marching on and we must never forget. And we must thank Him for these and numberless other blessings.

This Thanksgiving, instead listening to those seeking to terrify us with fear of death and a promise of imprisonment, fines, or a promise to allow for lawlessness and a violation of individual liberties endowed by our Creator, let us seek for His interposition as families, friends, neighbors, and all those that we love. Let us thank Him for His continued blessings and guidance. Exercise your right to praise and honor that Provident Hand above. That is Thanksgiving.