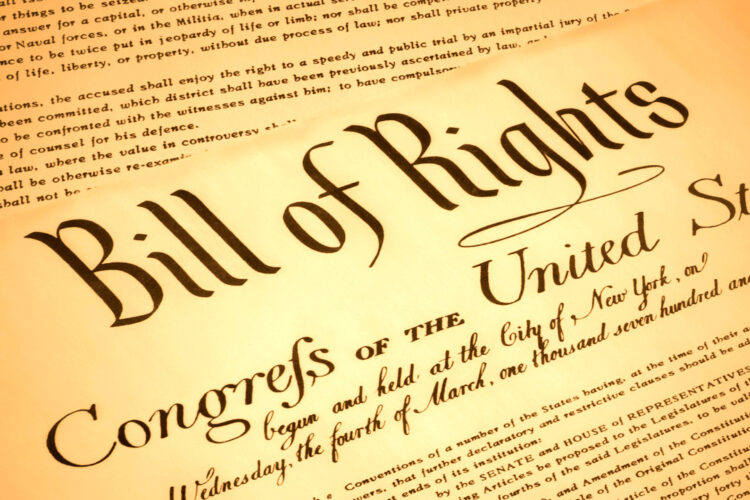 Twice, since taking office as the president, Biden stated “No amendment to the Constitution is absolute.” Once on April 8th and then again on April 28th. What Biden really is saying is, first, the Constitution is not absolute, or rather the Constitution is no longer the “supreme law of the land” nor is it of concern to him. And second, your rights, the amendments, are at the whim of government and you can consider them void if he says so. Additionally, it is clear that he and the rest of the ruling elite have no respect for the people or for their rights but rather believe that the only thing that IS absolute is their rule. The question, therefore, is that if “no amendment is absolute” what does that tell us about other amendments? This article will explain some of these non-absolute amendments and what that would mean if what Biden said was actually true, which it is not.

Let me say this first. The amendments are absolute. “The right of the people to keep and bear arms” is absolute, for example. Self-defense from predators in the form of criminals, foreign invasion and especially our own government is absolute, and the means of self-defense is not determined by anybody but oneself. Free speech is absolute. You can yell “fire” in a crowded theater, especially if the theater is on fire. One can use whatever words one chooses, even offensive words. Protections against unwarranted search and seizure, your right to property, to legal counsel, to speedy trials, to jury trial, to religion and assembly, etc., all are absolute. Normally, few people believe that rights can be given and taken at the whim of the madmen in government, though the current so-called epidemic has shown that some people think that it is kosher for these madmen to give and take rights in the name of “safety.” But I digress.

Now, let’s take a look at some of these other amendments that Biden claims are not absolute. The 13th Amendment ended slavery and involuntary servitude. So, if this amendment is not absolute some form of slavery is fine? Has that not been the position of the Democrat party from its inception—slavery, Jim Crow laws, segregation, anti-voting rights act, etc., all nurtured and maintained by them? What about the 14th Amendment, which was part of the three post-Civil War amendments, namely the 13th, 14th, and 15th Amendments? This protects all persons guaranteeing them equal protection of the laws. And then the 15th Amendment guaranteeing the right of citizens to vote without denying or abridging the right to vote “on account of race, color or previous condition of servitude?” Is Biden saying that because “no amendment is absolute” that discrimination in voting based on skin color is fine now? As is slavery and laws not being equal for all?

One that I believe would NEVER be included in Biden’s statement on the amendments not being absolute is the 16th Amendment. Biden and the Democrats, many Republicans, too, believe that income taxes ought to be paid and they should have absolute authority on how to make the people pay. On this one amendment alone do I think the people would readily agree SHOULD NOT be absolute or even in existence. It is the power of Congress to tax incomes progressively. While most people believe that income taxes did not exist before this amendment, that is false. The difference before was that the taxes had to be equally apportioned among the states based on population. Thus, the bill to a state would be a certain amount for one state and 5X more for a state with 5X the population. Income would be taxed solely based on population regardless of individual incomes. But again, I digress. Government and the people are at odds on this amendment. They would agree with Biden that it should not be absolute though government prefers this amendment above all others.

Another vital amendment that would be deemed highly controversial in its lack of being absolute is the 19th Amendment— the right of citizens to vote without discrimination based on sex. In other words, the right of women to vote was guaranteed by this amendment. While Biden may not believe that “no amendment is absolute” applies to this amendment, his statement of “no amendment” is an absolute statement, leaving no wiggle room for this amendment. Similar to the 15th Amendment that prohibits discrimination based on race or skin color in voting, this prohibits it based on sex. Both male and female are guaranteed the right to vote with this amendment. With his absolute statement, he is saying that he can deny the right to vote to anybody he chooses to deny. This would also apply to the 26th Amendment of guaranteeing the right of citizens aged 18 and up voting rights. Ages 16 and up or maybe any child old enough and willing to rub his leg hairs is old enough to vote is now the standard? How about discrimination based on religion, party affiliation, or everyone simply to maintain his corrupt authority?

I am sure Biden, as well as any successor to the throne would vehemently agree that a president and vice-president terms of office should not end automatically after two terms of office. After all, Biden has been in public office nearly his entire life. He and any other madman or madwoman lusting for power would love to maintain that power, increase that power for as long as they possibly could, then pass it onto whomever they deem corrupt enough to continue it. The 22nd Amendment definitely fits the absolute statement of not being an absolute amendment.

One final amendment that Biden firmly would agree is not absolute is the poll tax amendment, the 24th Amendment. He, Democrats, and other government madmen have never met a tax they did not find appealing. This amendment should not be absolute in their opinion and taxes should be levied before one can vote.

Much of these points are made tongue in cheek. However, when it comes to government madmen, I choose to trust none of them. As of late, these madmen are not hiding who they are, what they believe, nor the methods used to accomplish their nefarious deeds in their rush to acquire and secure their power. And with Biden, where one can expect a slip of the tongue on a daily, hourly, and even moment by moment basis, I believe it is no slip when Biden says “No amendment is absolute” on two different occasions, weeks apart and in different places. I believe what he says. He is and wants to be a totalitarian, only sharing power to accomplish his dastardly deeds, as well as those evil madmen who helped place him there.

The fact is that the rights enumerated in the Constitution, as well as those un-enumerated (per the 9th Amendment) are absolute. Our natural rights granted by our Creator are unalienable and un-infringeable. Regardless of what the Madman-in-Chief says, rights are absolute. The Constitution is concrete and is the supreme law of the land, not him, nor Congress, nor any entity of government. Until the madmen in government understand this, it is our right, our duty to throw them out, to abolish any form of government that will trample our absolute rights, if we so choose, and institute new government that will protect rather than despotically destroy or infringe upon them. We, the absolute sovereign authority, the people, will absolutely put a stop to this absolute nonsense if we absolutely must. And we absolutely should.