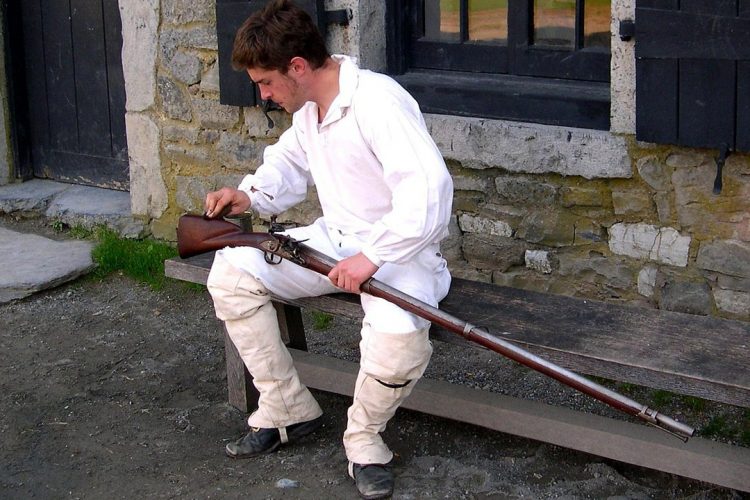 April 19, 1775, a date that sounded the end of control of the American colonies for England should be well remembered by all patriots. King George III had “a long train of abuses” against the American colonies, document very well by Thomas Jefferson in the Declaration of Independence, which he drafted about one year and two months after this fateful day. Americans were “more disposed to suffer…than to right themselves by abolishing the forms” of government that they cherished and to which they were accustomed. The king was about to reduce the colonies to an absolute despotism.

Planned days before April 19, 1775, the king’s troops, unnecessarily and illegally deployed to the colonies, sought to seize the guns, powder and other stores of the colonists from them, violating their rights as Englishmen and their God-given natural rights as human beings. This would have left them vulnerable to a tyrant and to other nefarious characters in their communities. This was the breaking point of the colonists. They had suffered at the hands of a despotic king long enough. Thus, on April 19, 1775, the Revolution began with the “shot heard round the world.”

When King George moved to seize the guns of the colonists, no matter what his justification was, even if it meant saving the lives of thousands or even one person, he demonstrated how unfit he was to rule. No justification can truly be made when the actions of the king would violate the inalienable rights of human beings. The same applies to all forms of government, including and especially a representative government such as the U.S.

There are many problems with gun control even today. Gun control will never stop any murders whatsoever, whether it is single murders or multiple murders. Individuals have been killing other individuals long before guns or even swords were around. The problem is not the inanimate tool. It is and always has been the animate object, an animate object being the object that has life and is able to move or act without any outside force, that uses the inanimate object, the object that has no life nor ability to move without some outside force such as an animate object to move it. Guns, swords, knives, any other tool are inanimate objects. Guns are just like pencils, cars, keyboards, TV’s, etc., in that they have no power to move themselves or act according to their design without some outside power to cause the action. This keyboard did not write these statements on its own. It required some outside force to animate what is written. Similarly, guns cannot kill any more than any other inanimate object, unless acted upon.

The problem is the animate objects. In the Las Vegas case or the Parkland case and other cases, individuals who fail to either use their ability to reason or have lost their ability to reason use their tools inappropriately to kill. The problem is individuals, not the tools. Rather than gun control, sword control, what is needed is criminal control. That control can only come AFTER THE FACT. People have no ability to divine when another will do harm to others. Government has no ability to divine this. No government, no individual can pass enough laws to prevent killing. Take guns away from all individuals, they will use swords or knives. Ban those, they will use bats, hammers or other tools. Ban rocks (impossible), they still have their hands and feet, to choke, kick or whatever to kill. The problem is the individual, not the tool.

First, gun control laws seek to prohibit the sale or transfer of certain weapons in whatever venue they may be transferred. This violates the 5th Amendment, which deprives a person, without due process, of the dispossession of their property, via sale or transfer to heirs or to the individual whom they choose. Government will confiscate the prohibited weapons, which were legal before the new law. This confiscation seizes property without compensation to the owner or heir to the property, which is a clear violation of the “Takings Clause” of the 5th Amendment. Even if government compensates the individual by giving them money, it is a forced exchange, rather than a voluntary one.

Moreover, this violates the “ex post facto” clause of the Constitution, which prohibits Congress from making that which was legal, illegal after the fact. In other words, the firearms that were legal become illegal. Owners then become violators of the law retroactively. How can anyone follow any law that prohibits an act in the future when it is legal now? Nobody can. In the case of states, the same actions would be in violation of the 14th Amendment. In addition, not being able to pass on to the heirs of the property violates an individual contract, that is, citizens’ wills, which is another violation of the Constitution, Article I, Section 10, which states “No state shall pass any…Law impairing the Obligations of Contracts.”

Next, a little known clause, the “bill of attainder” clause found in Article I, Section 9, prohibits Congress from targeting individuals or groups of people with laws directed solely at them. In other words, at the time of the law the gun owner may possess the weapon but nobody else can. Thus, the owner cannot transfer the weapon without violating the law targeting only the owner. The law must target all equally by making possession illegal for everyone immediately, and cannot single out one item of property but must make the transfer of all forms of property to heirs or buyers illegal, which would violate the “ex post facto” prohibition, making that which was legal, illegal retroactively. However, by making possession illegal, seizing the banned property violates the “Takings Clause,” as mentioned before.

In addition, universal background checks and firearm confiscation requirements all violate the 4th Amendment. All citizens have the right to “be secure in their persons, houses, papers and effects, against unreasonable searches and seizures” and must include a warrant issued “upon probable cause, supported by Oath or affirmation.” Simply stated, owning a firearm is not probable cause. Even if it was, no sworn warrant has ever been issued to do a check on my person or any individual alleging any violation of law. Again, a firearm confiscation is a violation of the 4th Amendment where firearms are seized without probable cause, a warrant or any other reason, except for firearms possession, not to mention a violation of the 5th Amendment, as previously stated. This again violates the Bill of Attainder Clause, which prohibits making firearms owners guilty without a trial of any kind. Bills of Attainder are simply known as declaring an individual guilty by legislation, rather than by trial with evidence provided and a jury or judge declaring guilt, which would not be the case in firearms confiscation.

Next the 10th Amendment prohibits the federal government from acting where no powers were delegated. No power to regulate firearms was delegated. Alexander Hamilton argued in Federalist 84 that freedom of the press, for example, could not be regulated because “no power is given by which restrictions may be imposed.” This is because no power to regulate the press is found in the enumerated powers found in Article I, Section 8, which is the list of powers granted to the federal government. No power to regulate firearms ownership was granted under this section of the Constitution. Furthermore, of course, the 2nd Amendment prohibits it.

In the 8th Amendment, government is forbidden from inflicting cruel and unusual punishments. The seizure of property in the form of confiscating firearms violates this when no crime has been committed. Possession of property is not illegal, nor can government ever make possession of property illegal, especially property that is singled out. It is certainly cruel and unusual to inflict punishment on an individual that committed no crime, or that violated no rights of any person whatsoever.

The final argument is the 2nd Amendment itself. In every amendment where the words “people” or “person” is used it refers to individual human beings or citizens. Thus, “the right of the people peaceably to assemble” in the 1st, “the right of the people to be secure” in the 4th, “No person shall be held…” in the 5th, etc., all refer to the citizens of the U.S. For some reason, the 2nd Amendment’s “people” is defined by anti-gun advocates as “the militia” or the “national guard.” Two different definitions of “people” makes little sense. Furthermore, “A well regulated Militia, being necessary to the security of a free State,” only serves to demonstrate why individuals or people have the right to keep and bear arms- so that the state, the nation can be free. If we apply the same “people” term for the 2nd Amendment as we do to the others, then nobody is left with any rights whatsoever. Only the national guard has the right to assemble or plead the 5th, etc? The idea is absurd.

Finally, the preamble of the Constitution clearly states that “We the People… do ordain and establish this Constitution for the United States of America.” This means that the power that we granted to the government, we necessarily possess. In other words, if we the people do not have any power to possess firearms, then we could not have granted the government that same power. Therefore, government has no power to possess firearms and must immediately disarm itself.

Furthermore, why would we the people grant authority to any government, person or other entity to tell us how we may choose to defend ourselves, our property or our liberty? I would certainly never allow anyone to tell me the limits of my personal defense. I will defend myself, my family, my liberty and my property by any method I deem to be the most appropriate response, by whatever method I choose, and to what end I choose to defend my right to life, liberty and property.

In conclusion, guns, just like any other inanimate object are tools and have no more power to kill a human being than a pencil or a car. This keyboard has no more power to write these statements than a gun has power to write these statements. An animate object must use the tool to accomplish the action taken. Furthermore, not only do gun control laws violate numerous aforementioned constitutional amendments, particularly the 2nd Amendment, they trample many other constitutional clauses. This undermining of the Constitution is a dangerous precedent to set with a blessing as fragile as freedom.