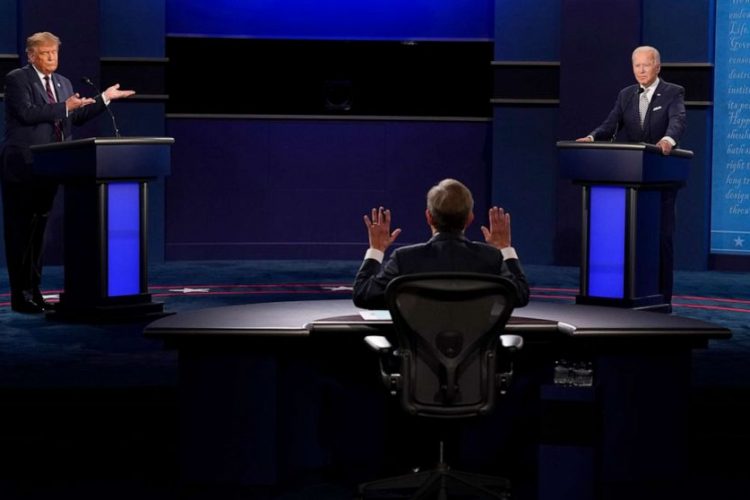 A number of things come to mind concerning the debate. I said this four years ago with the only difference being the Democratic nominee: Democrats and their supporters, including the media, will say Biden won. Republicans and their supporter will say Trump won. My concern is who lost. That is the American people.

I believe that we can get a sort of pulse of the nation or can take a litmus test from where the leaders are. They cannot stand each other, in this case. The despicable verbal abuse from both sides, particularly when the nation, when individual citizens are on a short fuse, ready for violence, ready for war, if you will, only serves to add fuel to the explosiveness of the country. The actions of leaders have a trickle-down effect on supporters of the leaders.

Also, in this case, I believe Isaiah warned and prophesied of our time most eloquently in chapter 9: 16-17: 16 For the leaders of this people cause them to err; and they that are led of them are destroyed.

17 Therefore the Lord shall have no joy in their young men, neither shall have mercy on their fatherless and widows: for every one is an hypocrite and an evildoer, and every mouth speaketh folly. For all this his anger is not turned away, but his hand is stretched out still.

We are seeing this fulfilled right before our eyes. And if you support either of these two, Biden or Trump, take your pick, then you fall into this prophecy. I, for one, will not fall into following a leader of this type.

Furthermore, in our day we have been told in scripture that I believe found in D&C 98: 9-10: 9 Nevertheless when the wicked rule the people mourn.

10 Wherefore, honest and wise men should be sought for diligently, and good men and wise men ye should observe to uphold; otherwise WHATSOEVER IS LESS THAN THESE COMETH OF EVIL.”

If we hope our country will return to civility, to some semblance of being a moral country with the freedoms and liberty endowed by our Creator, we must return to the principle of our Founding. We must do as Abraham Lincoln entreated us to do when he said of the writer of the Declaration of Independence, Thomas Jefferson. Lincoln said that Jefferson “established these great self-evident truths that when in the distant future some man, some faction, some interest, should set upon the doctrine that none but rich men, or none but white men, were entitled to life, liberty and the pursuit of happiness, their posterity might look up again to the Declaration of Independence and take courage to renew the battle which their fathers began. … Now, my countrymen, if you have been taught doctrines conflicting with the great landmarks of the Declaration of Independence; if you have listened to suggestions which would take away from its grandeur and mutilate the fair symmetry of its proportions; if you have been inclined to believe that all men are not created equal in those inalienable rights enumerated by our charter of liberty; let me entreat you to come back. … [C]ome back to the truths that are in the Declaration of Independence.”

Finally, we must return to our moral roots in Christ, for nowhere else can a sure foundation be built. The principles of our founding were rooted in the principles of our Creator, the Great Lawgiver who has power and authority to legislate for us in all cases whatsoever, He who will execute righteousness upon a nation will chooses to follow Him or will revoke those unalienable rights to the destruction of our people and country as the Supreme Judge, if we fail to follow the principle of Him, which, I believe, He taught leaders of our Founding Era.

I believe and hope the country will be saved but it will not be done in D.C., nor Boise, nor Sacramento, nor Austin, Tallahassee, Albany, NYC, nor any other center of power, nor by leaders in positions of power or those seeking for that power for their own purposes. But it will be saved by individuals who return to our Founding principles, to the principles of our Great Creator, the principles of He who endowed us with our unalienable, natural rights and turn against those seeking for power and pull down all the power usurped by leaders who are causing the people to err, to do wickedly. This can only be achieved in our individual lives, first, then in our families’ lives, second, and then to our fellow men and country. The time is now. The time is short. We all must choose wisely, the consequences of said choice we have no control over, which consequences are these: great blessing by the Hand of Providence or destruction by the hand of the evil one who delights and seeks the destruction of all mankind. I entreat you to choose the Hand of Providence.