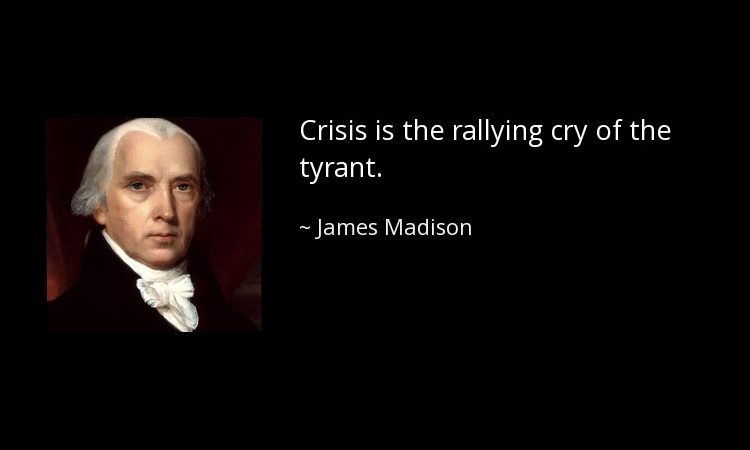 One thing is becoming clearer with each passing day that governments lock-down its citizens, deprives them of their ability to make a living, trample the unalienable rights of citizens to peaceably assemble, practice their religion, receive due process by trial because of some violation of a law, violated liberty to move about without harassment and use public property that would normally be allowed under normal circumstances all in the name of safety. James Madison wrote “Crisis is the rallying cry of tyrants.” The tyrants have rallied and it is time that the people rally against government, not by violent means, unless government turns to violence and the people must resort to self-defense.

I wrote in a previous article the numerous charges against Governor Brad Little, charges that mirrored King George III’s in our Declaration of Independence. Unfortunately, he still persists in his despotism and goes a step further with threats of license revocations, and refusal to hear the pleas of his people who are suffering from their forced inability to provide for the basic necessities of their families, whether spiritual, physical or mental. Some who have decided to rebel against Little’s unconstitutional and uncaring edicts are being threatened by a governor who one might think would be concerned with the plight of the families of Idaho, but is proving to be a governor “whose character is thus marked by every act which may define a Tyrant” and is therefore “unfit to be the ruler of a free people.”

But let us get down to the idea of these licenses issued by the state, by counties, or by cities. To understand this, we must first understand the basic nature of the powers vested in government. The US Constitution demonstrates that “We the People…do ordain and establish this Constitution for the United States of America.” Idaho’s Constitution is no different in declaring “All political power is inherent in the people.” In other words, by ordaining (US), it is bestowing or authorizing power to act. Those powers necessarily are in each individual, with limitations, that of not violating the rights of others. Inherent in the people means that the powers naturally reside in the people. To be short, no power granted to government can be granted unless those powers are naturally within each individual. A couple of examples will suffice, one showing powers that can be granted and one, licenses, which cannot be granted but only usurped.

The first example is that of theft. If my neighbor or any stranger attempts to steal my car or other property, I have the right and the power to prevent the attempt, by whatever means at my disposal. Thus, this power, granted to government, is a power which each individual naturally possesses. And it is a power we granted and could grant to government. In fact, that is precisely a power that Jefferson mentioned in the Declaration, “that governments are instituted among men, deriving their just powers from the consent of the governed” for the purpose of securing our rights to life, liberty and property. Thus, if government catches a thief in the very act or even after the fact, the powers inherent in each citizen are utilized to recover the stolen property and capture and punish the thief.

The second example is licenses. In the particular example of Governor Little using the Idaho State Police to enforce his unconstitutional edict to shutdown his arbitrarily decided non-essential businesses by threatening to revoke licenses. First off, licenses are not a power that the people inherently possess. For example, to open a business one must register with the Idaho Secretary of State and pay the proper fees ranging from $20-100. Is this a power that people can grant? Or is it a usurped, unconstitutional power? To answer this, ask yourself the question that I ask myself when trying to make that determination. Can I require you to fill out a form that I created with all your business information and then require you to pay me whatever amount I decided was reasonable in order for me to allow you to open and run your business? The answer is an emphatic “no.” I have no power nor right to do that to my fellow citizen and thus, I cannot grant government that power. The same applies to counties, cities and any other government that is instituted by the people to represent the people with their consent.

Whether the license is a business license to operate in the state or other government or whether it is a license or other certification that allows an individual to operate in a specific field of expertise, whether as a public school teacher, electrician, American Sign Language interpreter, barber or any other occupation that the state deems a license is required. And let us not forget that in order for any citizen to use our own vehicle to travel to these occupational locales, citizens are required to get a license and get their vehicle licensed in order to drive on roads that the citizens paid for with their hard-earned labors.

The number of licenses required in Idaho in order to labor in your chosen field is well over 250. Costs are of no importance as the power is a usurped authority, though they can be hundreds of dollars. It is simply something that each individual citizen cannot require of their fellow citizens. Therefore, it is not an inherent power that citizens can grant government. As a quick related side note, how many citizens know that they can have only two yard or garage sales in a year of only a few days before they must register and collect sales taxes, according to the Idaho State Tax Commission?

Now, what about the current scenario where Governor Little is threatening to revoke the license of a legitimate business? Just to give one example, a bar in northern Idaho was sent a warning on May 8, to cease operations or they will be rendered “disqualified from holding your license and subject your license to automatic revocation.” While they claim it is the law, the requirement to purchase a license or permission to operate is in violation of authority granted. Furthermore, an automatic revocation without due process is also a violation of authority.

Ignoring the usurped authority of licensing, how is it that the governor’s despotic edict decrees that this business cannot sell alcohol, which the state granted permission to do, then turn around and deny the business the ability to run, while at the same time state run businesses are declared legitimately open that are in competition with the private business selling the same product? The tyranny of the governor is plain for anyone to see when they look at what businesses, even various private businesses, are declared essential and which are declared non-essential by edict.

Getting down to the nuts and bolts of this article, it is plain to anyone with the simplest understanding of government licensing that a government that requires their permission, with the payment of the proper fees, has no qualms about revoking that permission. Licensing is unconstitutional, a usurpation of authority and when it comes down to it is a license to kill by government. While not a license to kill people physically, it is a license to kill their business, their livelihood, their liberty to pursue happiness — the very ideas that government is supposed to protect. It is time to end the lunacy of licensing. It is time to end government usurpation of authority.